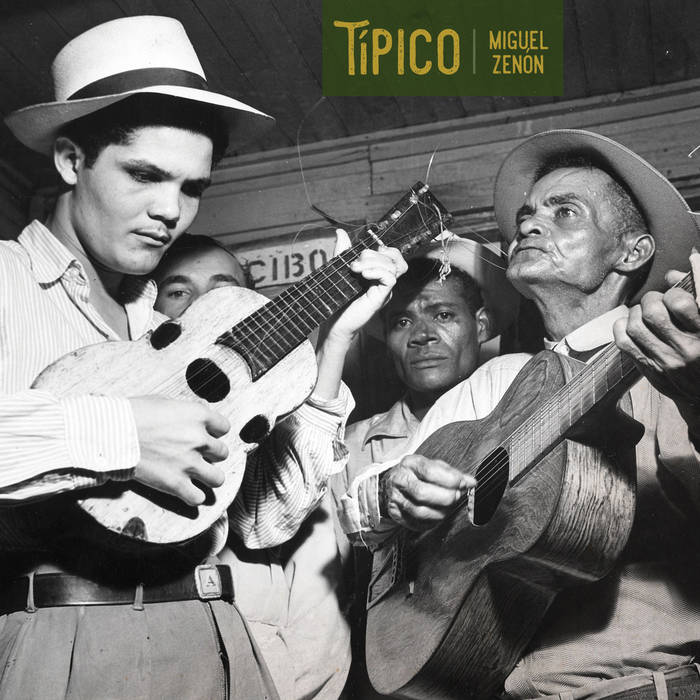 Miguel Zenón’s new album, Típico, is above all a celebration of his longstanding quartet. His past several releases have generally fleshed out that core unit with additional instrumentalists as Zenón has looked outward to explore various aspects of his Puerto Rican heritage. This new album feels more intimate. Its focus stays closer to home, with nods to Zenón’s own personal and professional life as it zeroes in on what makes his band unique.

“I was thinking about what this band and the guys in the band mean to me as I was writing the music,” he explains. “I kept going back to this idea of us developing this common language that identifies us as a band.”

That language has been developing for more than a decade. Pianist Luis Perdomo and bassist Hans Glawischnig have been with Zenón since the turn of the millennium; Henry Cole joined the band in 2005. Their language is thoroughly fluent modern jazz, with all the instrumental prowess and rhythmic and harmonic complexity that that implies. But the dialect they’ve created together through the years is distinctive.

Each of the album’s final three tracks, Zenón notes, was composed around a solo or signature rhythmic line that one of the band members had played before. “My approach was more systematic on those three compositions specifically. But the whole record essentially is about representing the sound of the band. The sound of our band.”

The album opens with “Academia,” a tune inspired by Zenón’s teaching at New England Conservatory, where he serves as part of the jazz faculty. “One of the great things about teaching at NEC is that I get the opportunity to create a personalized curriculum for each of my private students, depending on their needs and on what I feel they should be working on. So I find myself having to come up with new exercises constantly, in order to keep our interactions interesting and challenging. This composition is built around various harmonic and rhythmic exercises that I developed with some of my more recent students at the school.”

The second track, “Cantor,” honors Zenón’s friend and frequent collaborator Guillermo Klein. “Gullermo’s music has a very personal voice, something very unique. With this piece I was trying to convey some of what I feel are his most interesting qualities as a composer, like the lyrical character of his melodies and the very nuanced harmonic movement of his pieces. He also has very particular way of organizing the 3/4 bar, which he breaks down into three bars of 7/8 and one bar of 3/8. The piece touches on this a bit towards the end, sort of as a way of tipping my hat to a great friend and musician.”

The third and fourth tracks both stem from Zenón pondering what gives a particular song a folkloric feel. “Ciclo” emphasizes melody and rhythm, Zenón taking “a melody that is meant to sound very folkloric — a bit simpler harmonically and delineating a very specific beat” and building a complex extended cycle around it using smaller, interlocking rhythmic cells.

“Típico” approaches its folkloric aims harmonically. “There’s a harmonic cadence that is very common in Latin American music, especially music in the Caribbean. Something that revolves around a minor key and then slides down, going ‘Subdominant Minor – Tonic Minor – Dominant – Tonic Minor.’ A very simple cadence, but one that is very unique and effective. It’s always caught my ear because I’m always on the lookout for things that serve as sort of musical connecting threads, things that makes me feel that the music from all these different countries and cultural expressions is somehow connected and coming out of the same combination of elements. I built this specific composition around this cadence, and called it “Típico” in reference to this Pan-American idea.”

“Sangre Di Me Sangre” is a tune the quartet has been playing for a while now, a balladic tribute to Zenón’s 4-year-old daughter, Elena, written before her first birthday. “I was sitting in this park with her,” he recalls. “She was playing around and I sat down and sketched out the song on my notepad.” Zenón wrote the piece first with lyrics, then orchestrated it for the quartet, featuring Glawischnig’s bass both on a sprightly introductory melody played in unison with Perdomo and on a solo meant to convey a singing quality.

Glawischnig is also featured on “Corteza,” its melody derived from Zenón’s transcription of his bass solo opening the track “Calle Calma” on the 2009 Zenón album Esta Plena. It, too, has a balladic feel, with lyrical solos from Zenón and Perdomo leading to a closing uptempo restatement of the theme.

The Perdomo feature “Entre Las Raíces” (“Amongst the Roots”) is more fiery, emphasizing two key facets of the pianist’s musical personality. The intricate melody he and Zenón whip through together was transcribed from a Perdomo solo on “Street View: Biker,” the opening track on Perdomo’s album Awareness. But this arrangement opens with Perdomo playing wild and free, and Zenón’s alto solo when it comes reveals a free side of his own, veering more toward Ornette Coleman or Albert Ayler.

“The piece is very free in terms of the way we deal with the improvised segments,” says Zenón. “Luis always talks about listening to Bud Powell and Cecil Taylor at the same time when he was growing up in Caracas, and always having a foot in this freer, avant-gardish world of jazz. And when you hear him play on that track, it sounds that way. For that piece specifically, he really sounds like he’s 100 percent in his element.”

Cole’s playing is suitably free on “Entre Las Raíces” as well, but his featured track, “Las Ramas” (“The Branches,” Cole’s own debut album having been titled “Roots Before Branches”), required more discipline. “I wrote the piece around this figure that he has been developing over the last few years and plays all the time,” says Zenón. “The piece is very difficult to play — sort of like an etude for the drums, pretty much. And I know he worked very hard on it. Even though the original idea came from him, he worked very hard on making it precise and making it clean, and really sounded amazing on this track.”

It’s no accident that the final three songs are named for parts of a tree. “I was thinking of the band as a tree,” Zenón acknowledges. “And thinking of myself as the watcher. I mean, I’m part of it also. But mostly I’m observing these amazing musicians night after night, and how together they kind of make up this living organism.”

Zenón is onto something with that metaphor. The spotlight cast by Típico illuminates how alive his quartet’s music has always been, while never ceasing to evolve and grow.

* Academia is for my students at the New England Conservatory.
* Cantor is for my friend Guillermo Klein.
* Sangre De Mi Sangre is for my daughter Elena.
* Corteza is for Hans, Entre Las Raíces for Luis and Las Ramas for Henry.